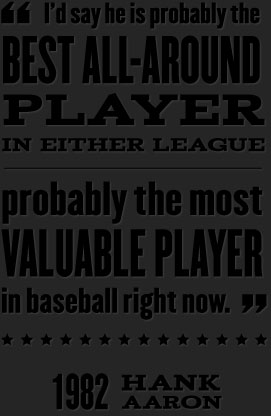 Dale Murphy was chosen by the Atlanta Braves in the first round of the 1974 Major League Draft. Over the next few years, he worked his way through the Braves minor league system and made his major league debut in 1976.

Although he began his career as a catcher, he spent a short time at first base and finally ended up in the outfield where he became the youngest player in history to win back-to-back MVP awards (1982 and 1983), was named to the National League All-Star team seven times, earned four Silver Slugger awards and five Gold Gloves. During his 1983 MVP season, he became the only player in history to compile a .300+ batting average, 30+ home runs, 120+ runs batted in, 130+ runs scored, 90+ bases on balls, and 30+ stolen bases in one season. During the decade spanning 1981-1990, he led the major leagues in home runs and RBIs. He also led the National League in games, at bats, runs, hits, extra base hits, runs created, total bases, and plate appearances during that same period of time. With 7,960 at-bats, he retired in 1993 after a long and successful career with the Atlanta Braves (1974-1991), the Philadelphia Phillies (1991-1993), and the Colorado Rockies (1993.)

Dale was one of the most beloved athletes to ever play in Atlanta. His number (#3) was only the fifth in Braves history to be retired joining those of baseball greats Hank Aaron, Eddie Matthews, Warran Spahn, and Phil Niekro and hangs today in Turner Field. 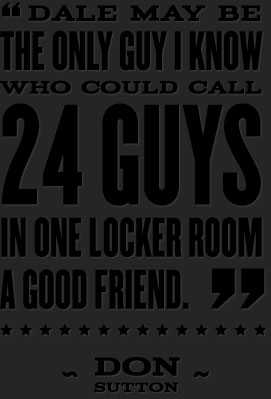 Known as one of the true gentlemen of the game, Dale has always led by example, giving his time and lending his name to numerous charities throughout the years. In 1987, he was named by Sports Illustrated as one of the "Sportsmen and Sportswomen of the Year," representing baseball as the athlete "Who Cares the Most" and was honored as such by President Ronald Reagan at the White House.

Dale received other humanitarian-related awards during his career including The Lou Gehrig Award (given to the player who best fits the image and character of Lou Gehrig on and off the field), The Roberto Clemente Award (given annually to one major league player in recognition of his character and charitable contributions) and the Bart Giamatti Award. After his retirement, Dale was inducted into the World Sports Humanitarian Hall of Fame.

In 2005, Dale founded the I Won't Cheat Foundation to promote integrity and character development among the youth of America. Originally created in an effort to educate kids about the dangers of steroids, I Won't Cheat has evolved into a program with an even wider focus which teaches kids to play fair in sports and in life. In an effort to further this message, Little League places an I Won't Cheat patch on the sleeve of every player's uniform during the Little League World Series. From Nike to Disney, countless corporations have voiced their support of I Won't Cheat and the motto they promote: "Character Matters Most."

Dale is a sought after business and motivational speaker and divides his time between charity work, church work, and his family. He and his wife, Nancy, are the parents of eight children (seven sons and one daughter) and three grandsons. 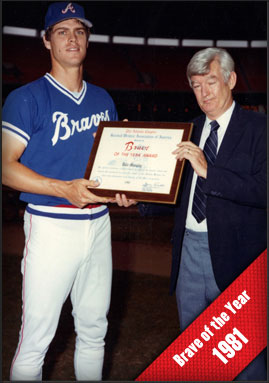 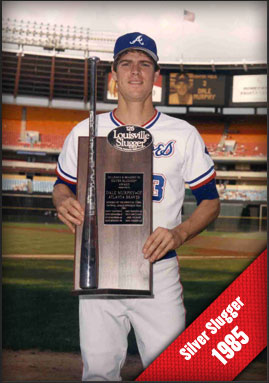 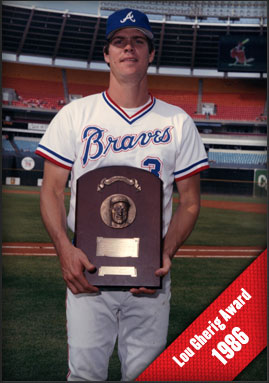 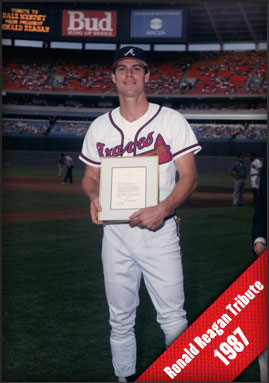